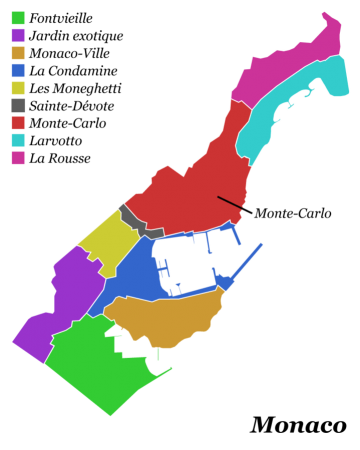 Tucked away in the extreme north of Monaco and shielded from the Mediterranean coast by the ward of Larvotto to the east and south, you will find La Rousse-Saint Roman. Traditionally, this region has been part of the municipality of Monte Carlo, but following the merging of the Monagesque municipalities in 1917, a unified set of administration zones was created.

La Rousse-Saint Roman was the seventh ward of Monaco, and the second to be created in what was once the municipality of Monte Carlo. Monte Carlo now consists of four wards in total, following the creation of nearby Saint Michel.

La Rousse is the area of Monaco that enjoyed the second highest number of real estate transactions during 2018 –  the total of 114 resales narrowly eclipsing the previous year’s figure. However, there was a significant rise in the average sale value from €4,109,000 to €5,244,000.

As with other districts of Monaco, this may partly be explained by the influx of families looking for larger homes. Nevertheless, an increase of 27% shows the scale of investment returns available once you become a Monaco property owner. Work is well underway on the new-build Testimonio II project which is due for completion in 2022

The skyline of La Rousse-Saint Roman is dominated by Tour Odeon, the tallest building in Monaco by some margin. As the extreme high rises we see in cities across the world are not permitted to be built within the bounds of the principality, the construction of 170m Tour Odeon between 2009 and 2015 was unusual and was not without criticism.

While La Rousse-Saint Roman does not have a coastline, it is ideally positioned for exploring many of the eateries, amenities, and shopping options across the area, and also for venturing into France via the border to the north and west.

The aforementioned Tour Odeon is more than just a modern landmark of Monaco; it is also home to some of the region’s most exclusive pieces of real estate. The penthouse apartment here is the most expensive in the world and covers five floors.

Monte-Carlo Sun is a beautiful development and is as famous for its verdant garden areas as for its well-appointed real estate. At 26 floors, this is one of the taller developments in Monaco, although it does not rival the nearby Tour Odeon in height.

Park Saint-Roman is the work of one of the Mediterranean’s most well-respected architects — Luigi Caccia Dominioni, from Milan in Italy. Today, it remains one of Monaco’s architectural gems.

Situated on the avenue that bears its name, Annonciade is one of the best-positioned properties in the area. It is also one of the quietest, providing a nice escape from the hustle and bustle of Monaco.

Chateau Perigord is a popular choice for those seeking exclusive real estate in Monaco. Much of its appeal is down to its proximity to the beaches in neighbouring Larvotto.

Another fine spot near Larvotto’s beaches. Residence Saint Georges provides the best of both worlds — access to the Mediterranean, and also to the amenities and attractions of Place du Casino.

From Villa del Sole, you will be able to access the coastline at Cap Martin and Lavrotta. The development is a striking building with a character all its own.

With so many properties located within striking distance of the coast at Lavrotta, it is easy to see why La Rousse-Saint Roman is so popular with real estate investors. It is also somewhat quieter than other areas of Monaco, only adding to the appeal.